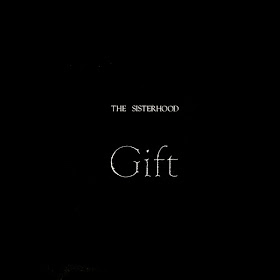 Let us now delve into one of the more tempestuous tales in the history of Gothic Rock.

We need to travel back to 1986 when The Sisters of Mercy were riding high on the success of their debut full length release First and Last and Always. Plans for the second album, reportedly to be called “Left on Mission and Revenge”, were underway, but all was not well. Recent gigs had been fraught with tension and guitarist and lead song-writer Gary Marx left the band mid-tour citing “personal differences”, and left The Sisters to complete tour dates of Europe and the US as a three-piece (Thompson, D. The dark reign of gothic rock: In the reptile house with The Sisters of Mercy, Bauhaus and The Cure, Helter Skelter (2002)). He’s by no means vanished from history however, and soon turns up in Ghost Dance with Anne-Marie Hurst, former vocalist with fellow Leeds Goth act Skeletal Family, who had regularly served as The Sisters’ support act.
However, we digress.

Rehearsals of the new songs were going no better. As Eldritch would relate the tale later;

“They said, ‘Well okay, what are we going to do for new songs?’ and I said ‘How about this, this, and this’ and unfortunately the first ‘this’ I cited had too many chords per minute and Craig said “If that’s the guitar line, I’m not playing it’ and walked out.”

Wayne Hussey followed suit, exiling himself from The Sisters just one day later. As he would later explain events in contrast to the Eldritch version:

“We got to doing the second album and Andrew said ‘I’m not singing any of your songs’. That’s what it boils down to. Craig walked out of rehearsals and a day later I did. He was listening to things like Fleetwood Mac, Stevie Nicks, Foreigner and there was us listening to Motorhead or whatever. And it showed.”
(Mercer, M. The Gothic Rock Black Book, Omnibus, 1988).

Curiously, Hussey and Eldritch would re-join for just one gig in Hamburg before formally announcing that The Sisters of Mercy had dissolved (Thompson, D., 2002). One would imagine that the backstage vibe at this gig must have been both weird and awkward, but this is where the real fun starts.

And so it begins: Wayne Hussey and Craig Adams regroup.  They’re joined by Mick Brown, previously drummer with fellow Leeds Goth band Red Lorry Yellow Lorry and Simon Hinkler, formerly with Artery. Then they announce that they will call themselves The Sisterhood. By strange err...coincidence, this also happens to be the name of The Sisters of Mercy fanclub.

So, what to do? The easiest approach is to launch legal action, easy because Eldritch already owns rights to “The Sisterhood” name.  A much more proactive approach however is to quickly record and release something using “The Sisterhood” name himself, thereby completely asserting rights to the brand.  Eldritch evidently fancies a quickie, and as Liisa Ladouceur observes, in many ways, The Sisterhood is best regarded as a “legal pissing contest disguised as a band” (Encyclopedia Gothica, ECWpress, 2011). Certainly, the “band” never performed live.

This path does pose certain difficulties however, chief among them being that Andrew Eldritch’s contract with Warner prohibits him from personally appearing on the album (drum machine, the indomitable Doktor Avalanche is fortunately not bound by any such odd conventions of meatspace and will be used to great effect) . To get around this, Eldritch ropes in the then largely unknown vocal talents of James Ray, later to become much better known with James Ray and the Performance and James Ray’s Gangwar, who sounds so much like Eldritch, that initially many suspect he may be a fictional entity. Regarding the politics surrounding The Sisterhood, Ray would later observe;

“I really didn’t give two monkey shits what was going on, it was just I went down and sang a song and that was it. I didn’t think anything of all that. Eldritch asked do you want to release a single with me and he asked me to start explaining why he was doing it and I just didn’t care, it was just a chance to make a record y’know?”

In an interesting aside, James Ray would later go on to release several albums through Eldritch’s label Merciful Release and would eventually note on the subject of Eldritch;

Again, we digress, but isn’t it interesting to observe how often these very similar descriptions of Andrew Eldritch emerge from those who have had the intriguing experience of working with him?

Next, we require a bass player. In what would later prove an inspired choice, Eldritch enlists Patricia Morisson, formerly with LA punk/death rock group The Bags, then with The Gun Club, and at the time touring as Siouxsie’s support act, Fur Bible. She too will later assert that Andrew Eldritch cheated her out of money, but that’s a story for another time. Original Motorhead drummer Lucas Fox is roped in to co-produce and we are ready to begin.

The result is the “Giving Ground” single (Merciful Release, 1986). Obviously, it’s designed to serve the very pragmatic purpose of rapidly and efficiently fucking over the opposition rather than any pretensions to high art. Accordingly, the cover art is extraordinarily minimalist to say the least.

Equally minimalist is the track listing – why bother with a “real” B-side when you can just bung on a longer version of the A-side? And so, we are presented with the A-side “Giving Ground (RSV)” and the B-side “Giving Ground  (AV)”, the latter clocking in with a bonus 52 seconds. For the curious, AV and RSV are Biblical references denoting “Authorised Version” and “Revised Standard Version” respectively. So now you know! 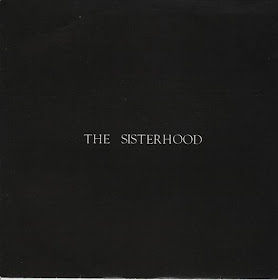 His rivals’ guns neatly spiked, they are forced to concede defeat and change their name to The Mission. Eldritch ponders where to go next. He and his new-found playmates begin work on a little something titled “This Corrosion”, but Eldritch wisely decides to keep it under his hat for later, so perhaps a Sisterhood EP is in order?

And so, with no further ado, ladies, gentlemen and unwitting small children lured here by accident or evil design, we bring you the Gift EP.

This one has attracted quite a diabolical reputation over the years, but is it as bad as often supposed?

Actually, the answer is probably not. Part of the problem almost certainly lies in that the Goth scene had never heard anything quite like this before.  Although it’s certainly true that it doesn’t stand up to close scrutiny, most of the tracks aren’t bad at all, in fact it’s rather more of a fascinating listen to hear in it the germination of ideas that a year later will reach maturity on The Sisters epic and awesome album Floodland (Merciful Release, 1987). Indeed, some CD versions of Floodland will include “Colours” as a bonus track.

The opening track “Jihad” is actually quite strong, it’s opening line of “2-5-0-0-0” commonly rumoured to be a mocking reference to the amount Eldritch was able to sue Hussey & Co for infringement of intellectual property.

Meanwhile, “Finland Red, Egypt White” continues the, if nothing else, “economical” nature of the project by inventively quoting the specifics of an AK-47 (AKA: a Kalishnikov assault rifle) direct from a weapons and ammunitions catalogue in place of anything resembling real lyrics. “Rain from Heaven” is perhaps less remarkable although remains interesting for featuring the vocals of Suicide’s Alan Vega.

If there is a genuinely weak point here, then it’s ironically the single “Giving Ground” (here a different version from either found on the 7”). James Ray once described this as “It’s a terrible track” and he’s absolutely correct. On listening to the keyboard line, I can’t help but think it’s what this little guy might sound like on a whole mountain sized heap of Xanax. Never fear however – the song is not without redemption as Christian Dorge’s project Syria would later demonstrate to excellent effect on their album Ozymandias of Egypt (Black October Records, 1993). It doesn’t appear to be on Youtube, but I strongly suggest that you hunt a copy down since it does genuinely demonstrate with convincing power that it is indeed possible to polish a turd.

And so, gentle readers, there you have the whole sorry tale. We will leave it to the conspiracy theorists among you to muse upon the ever-persistent story that the entire stoush was in fact a totally confected row designed to maximise publicity for both parties. 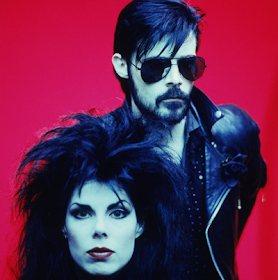