Fields of the Nephilim – Burning the Fields EP (Tower Release, 1985) 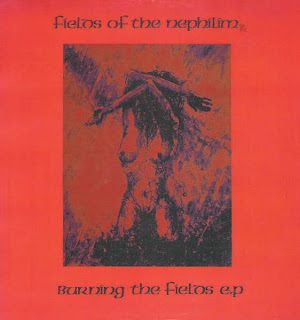 Ahh…
How could we not talk about Fields of the Nephilim? Indeed, when I first became interested in Gothic Rock which is now literally more than half a life-time ago, even just their name fascinated me.

That they were influenced by the The Sisters of Mercy seems too obvious to say. That eclipsed only by The Sisters, they would become the prime influence on 90’s Goth seems doubly so. That without them the entire subgenre of Gothic Metal from Paradise Lost to Tiamat to Moonspell would never have existed is indisputable.

But all of this comes later, and is a story for another time. What concerns us now is a vastly younger and somewhat softer band with their first release and a saxophonist come keyboard player by the name of Gary Wisker.

Yes, you did read that right – the same harder-than-nails Goth gods that goose-stepped straight out of Ennio Morricone’s fever dreams once possessed a saxophonist. However, we’re getting ahead of ourselves.

Fields of the Nephilim originally sauntered out of in Hertforshire during 1984. At the time they were apparently working under the name of Perfect Disaster, itself a perfect disaster of a name that could easily have belonged to any of the godawful metal cover bands I was subjected to while growing up in the of the late 80s. They very sensibly changed it to The Mission, only to have that idea completely derailed by the massive schism that occurred in The Sisters of Mercy camp.

Clearly, a new name was needed and, likely inspired by their new vocalist and Kaos Magick enthusiast Carl McCoy, began delving into more obscure parts of The Old Testament and Fields of the Nephilim came into being. It’s probably safe(ish) to say that most fans of Fields of the Nephilim are aware that the name derives from a biblical race of giants, but as few people have actually bothered to read the relevant bits and pieces, it’s probably worth taking a look:

“(1)And it came to passe, when men began to multiply on the face of the earth, and daughters were borne vnto them: (2)That the sonnes of God saw the daughters of men, that they were faire, and they took them wiues, all of which they choose…(4) There were Giants in the earth in those daies; and also after that, when the sonnes of God came in vnto the daughters of men, and they bare children to them; the same became mightie men, which were of old, men of renowme.”  Genesis 6:1-4 KJV

This is of course, about as far as most people get, and they understandably come away thinking that the bits about giants were awesome, but still bewildered as to where the band derived their name from. This is an unfortunate effect of later reiterations of The Bible striving to popularize itself by removing all the more esoteric references. To find the actual mention of The Nephilim, we need to look much earlier, and The Torah will do just fine:

“(1) And it came to pass, when men began to multiply on the face of the earth, and daughters were born unto them, (2) that the sons of God saw the daughters of men that they were fair; and they took them wives, whomsoever they choose…(4) The Nephilim were in the earth those days, and also after that, when the sons of God came in unto the daughters of men, and they bore children to them; the same were the mighty men that were of old, the men of renown.” Genesis 6: 1-4 Torah.

Aha! And now we have the name, but we’ve somehow lost all mention of giants. To get that, we need to look a little bit further:

“And they spread an evil report of the land which they had spied out unto the children of Israel, saying ‘The land, through which we have passed to spy it out, is a land that eateth up the inhabitants thereof, and all the people that we saw in it are men of great stature. (33) And there we saw the Nephilim, the sons of Anak, who come of the Nephilim; and we were in our own sight as grasshoppers, and so we were in their sight.’” Numbers 13: 32-33 Torah.

And, Ta-Dah! Imagery no doubt pitching a tent in Carl Mc Coy’s pants rivaled only by the big top it must have pitched in Erik VonDaniken’s. (Serious students of esoterica and apocryphia might care to go here.)

But enough of this nonsense! You want to hear about the music, yes? And rightly so.

The year is 1985 and already the effects of The Sisters’ Reptile House EP and the single, released at the absolute peak of the first wave of Goth in ’83 are being felt. Never shrinking violets, those young Turks, The Nephilm picked up the ball and ran with it (three metaphors in one sentence – Go me!). The result musically, was something in the Sister’s pre-Wayne Hussey mold but with harsh vocal stylings previously seen only in proto-black metal bands like Venom or Celtic Frost albeit massively slowed down.

The EP itself is  quite the dynamic little number, commencing with the jaw-dropping “Trees Come Down” which in itself, could have easily become the The Nephilim’s signature tune if they hadn’t gone beyond all expectations of the time and bettered it just a few short years later with “Preacher Man” (Situation Two, 1987) and “Moonchild” (Situation Two, 1988).

“Back In Gehenna” follows (More Old Testament references!), but is perhaps overshadowed by some of the other tracks on the EP and it is here that we first encounter the saxophone. Not that it is bad in any way, but despite its compelling self-referential line “we are the Nephilim!”, it does seems a weak and runty beast when compared to the EP’s other offerings. Not that that stopped the band re-recording it for the Returning to Gehenna EP ( Supporti Fonografici, 1986). 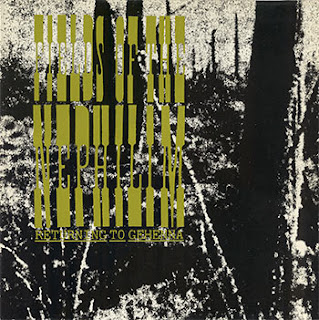 Then we hit “Dark Cell”, quiet, laid back and heavy on the saxophone. I think I may have mentioned several times in the past that I’m not keen on the sax, but here it actually does something worthwhile. Nevertheless, after this, the Nephs seem to have woken up to the fact that the post-punk era of sax, as employed by Theatre of Hate, Ritual and Actifed et al. was over and after the Returning to Gehenna EP, the saxophone, and for better or worse, the keyboards were gone forever after.

Last, but far from least, we come to “Laura”. It is without question, one of Fields of the Nephilim’s strongest earlier songs. It’s a more relaxed version we hear here in the original than in later versions, but the fact that Fields of the Nephilim would go back and re-record it not just once but twice speaks volumes in itself. Its first reincarnation appears on the Returning to Gehenna EP (as “Laura (New Version)”), and then again on the B-side of  the Preacher Man single (Situation Two, 1987) as “Laura II” before reappearing yet again as bonus tracks on the various later re-releases of their debut LP Dawn Razor (Situation Two, 1987).


I’ve always been one for album cover art so, despite not particularly liking that which graces Burning the Fields, I can’t help myself but to note that right from the start, Fields of the Nephilim aimed straight for the heart of collectors, and accordingly, there exist a number of variations on the original sleeve, all through Tower Release in 1985. 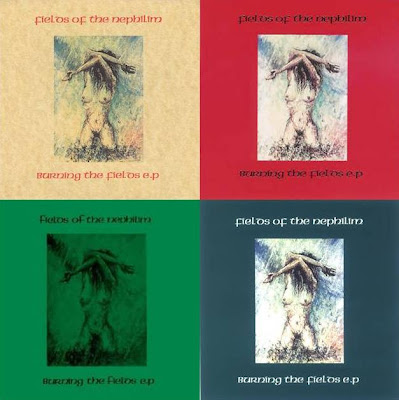 Speaking of Tower Release, I strongly suspect that this may have been The Neph’s own label; an early Nephilim song bears the title “The Tower” and Burning the Fields and its eventual 1993 re-release on CD are the only goodies that ever came out from said label. Strangely though, it appears to have been a child of Jungle Records. While I can’t claim much expertise in record licensing or distribution, this does seem a very odd arrangement.

Cover art on the rear of Burning the Fields is equally interesting, albeit for quite different reasons, namely the band pictures.

The story told here is quite plain – at the time of releasing Burning the Fields, the band were yet to adopt the post-apocalyptic cowboy pose that would later become their trademark. Equally interesting though is the EP’s central sticker, clearly suggesting that even at this stage, the cowboy concept was already past its initial incubation period. 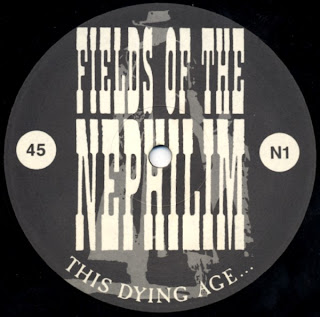 Given their level of influence on Goth throughout the 90s, I doubt this will be the last we see of Fields of the Nephilim on Plunder the Tombs, but for now, let it be the end. 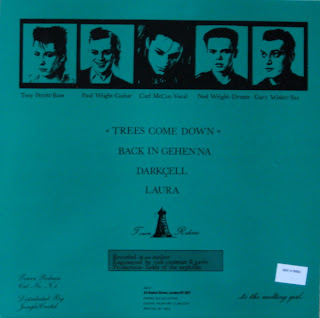 Email ThisBlogThis!Share to TwitterShare to FacebookShare to Pinterest
Labels: Back in Gehenna, Burning the Fields, Fields of the Nephilim, Goth, The Sisters of Mercy
Newer Posts Older Posts Home
Subscribe to: Posts (Atom)