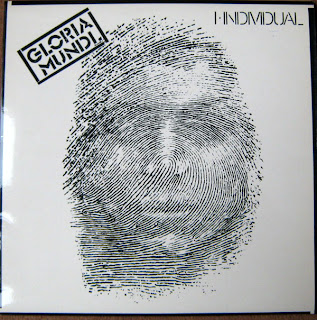 Another tragic loss to the ravages of time, Mick Mercer once referred to these kids as “lost Goth giants”, thereby contradicting his own earlier statement that the rise of Goth “can truthfully be traced only as far back as the rise of Bauhaus” (Mercer, The Gothic Rock Black Book, Omnibus Press, 1988).
Gloria Mundi started coming to public attention supporting early John Foxx-era Ultravox! Indeed, saxophonist C.C. actually worked as a session musician on the track “Hiroshima Mon Amour” on the second Ultravox! album Ha!-Ha!-Ha! (Island Records, 1977), and bassist Ice had previously played in an outfit known as Yours with early Ultravox! guitarist Stevie Shears.
Highly theatrical in their live performances, Gloria Mundi stood apart from the majority of their post-punk peers in being driven more by a sense of gloom than by any more nihilistic tendencies, a noose reportedly gracing their stage on regular occasions. 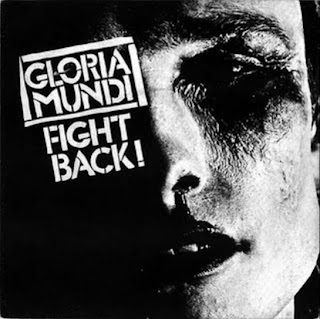 First materializing on vinyl with the Fight Back! single (RCA, 1978), the astonishing musical document that is I, Individual was their first full length release. Complex and diverse, the album ranges from the outright punk of “Split Personality” through to longer labyrinthine arrangements that suggest the band may have been more than passing fans of Eno-era Roxy Music. A strong flavour of performance art remains throughout, providing a thread that would later be picked up by early Dark Cabaret artists, most noticeably Sex Gang Children.
I-Individual

Perhaps too far left of field for their time to gain widespread acceptance, the true legacy of Gloria Mundi remains as being the nurturing uncles of the then nascent Bauhaus, inspiring the latter as their support band to adopt a more refined image that would become the template of the ten million Goth acts that would follow in their wake.
Several more singles and a second album, The Word is Out (RCA, 1979) would follow, before Gloria Mundi would dissolve, leaving Eddie and Sunshine to continue as the imaginatively named Eddie and Sunshine who released several singles and at least one LP, Perfect Strangers in 1983, described as “synth-pop” through Survival Records. Sunshine continues to work under the name Sunshine Gray. 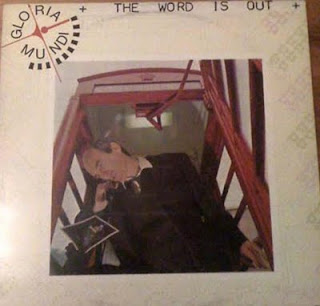 I think we should let Mick Mercer have the final word here, writing in the introduction to his self published (?) photo book of Gloria Mundi : “Indisputably the first Goth band”.
And brilliant they were. 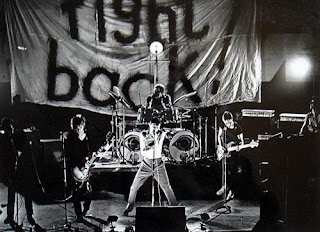 Line Up: Eddie Mealoy (vocals), Sunshine Patteson (vocals, keyboards), C.C. (saxophone), Ice-AKA Roland Oxland (Bass), Beethoven – AKA Pete Vas (guitar), Mike Nicholls (drums)
The line-up of Gloria Mundi seems a little dubious. While everyone agrees on Eddie and Sunshine as core members, there is little consensus on anyone else. Who was actually in the band and who were hired guns along for the ride seems to depend largely on who you read.

This is the rear cover  for I, Individual, but the
track order (at least on the version I own) is completely wrong. 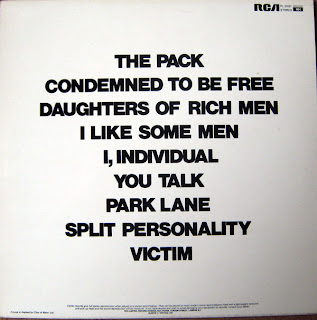 http://en.wikipedia.org/wiki/Gloria_Mundi
http://www.myspace.com/gloriamundifansite
Posted by James Von Sutekh at 5:26 AM 4 comments: