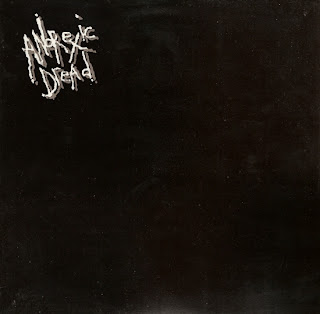 Falling somewhere in the gap between Alien Sex Fiend and a slo-mo version of The Cramps, the short-lived Anorexic Dread appeared out of DanielleDax’s hometown of Southend, Essex in 1983, lasting until just 1985. Perhaps best described as a kind of Horror-Punk / Psychobilly outfit, other obvious influences included The Birthday Party and Killing Joke. If they’d been American, it’s a fair bet that Anorexic Dread almost certainly would have come under the Deathrock tag. Frontman Phil Black was quick to belie the band’s morbid image however, stating

“..we go onstage and have just as much of a lunatic time leaping around. We don’t take what we do seriously. We go onstage to enjoy ourselves and we invariably do.”

The ’s Burning 12” recorded at Diploma Studios represents Anorexic Dread’s sole contribution to vinyl. Interestingly, while discogs.com lists only one version of the 12”, variations of the cover art appear to exist, with the band’s logo sometimes appearing top left, and sometimes in the top right. The variant album cover can be seen on the deathrock.com link below.

Side A of the 12” begins with the epic nine minutes plus title track “Tracy’s Burning” and its conclusion “Epitaph” while side B graces us with the much more Psycobillyesque “Tick Tock”. I must confess, that this didn’t do much for me on initial hearing, but it does grow on repeated listenings, actually becoming kind of endearing. And here for your listening pleasure:

The band played quite a few venues around including The Pink Toothbrush /Crocs (Don’t bother Googling “Crocs” – you’ll just end up with links to a lot of sites selling some spectacularly unattractive excuses for what passes as “shoes”). They also played The Batcave in on at least one occasion, and managed to wrangle a support gig with Alien Sex Fiend, a coupling I imagine would have worked perfectly for them. 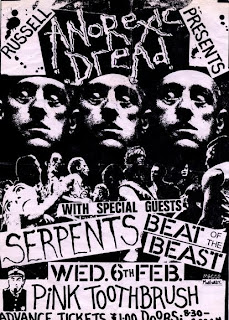 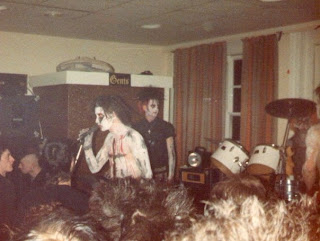 Things didn’t last too long after the 12” however, with Anorexic Dread’s guitarist going walkabout as a roadie for The Cure. A new line-up did record a demo “Dark Night in ”, apparently in a more straight forward rock direction, but the band seems to have dissolved soon after. Other songs are documented to exist including “She’s Beautiful and She’s Mine”, “Dragnet” and “Limelight”, but as far as I can tell, none were ever formally released.

There’s a common misconception, especially amongst newer musical collectors of subgenres that “obscurity” somehow equates with “credibility”. In reality, some bands remained obscure because they weren’t in existence long enough to make a real impact, some because they never got the breaks, some because they were so left of field as to never catch on, and quite a lot who remained obscure because they simply weren’t that good. In the case of Anorexic Dread, I suspect that this is very much a matter of personal taste, but I do think it worth more than just one listen before making your mind up. 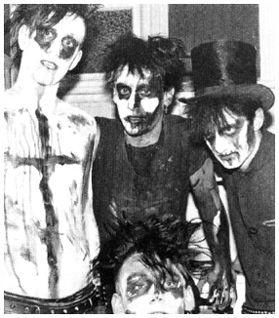 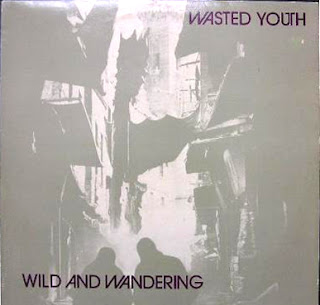 Not to be confused with the LA hardcore band of the same name, The UK version of Wasted Youth formed in 1979 at the notorious Bridge House in East London’s , which became at once pub, home base, gig venue and record label. Not that the lads were complete newbies to the music scene; brothers Ken and Andy had previously played in the Tickets, and bassist Darren was formerly in Darren’s Dead Flowers. An unreferenced Wikipedia article also states that Ken may have also had a past in a Black Sabbath influenced hard rock act known as Warrior, but other sources are curiously silent on the matter. Never fear – onwards!

The first singles “Jealousy” and “I’ll Remember You” both appeared in 1980 (Bridge House Records) before being compiled and rereleased for the French market as the cheerily monikered My Friends Are Dead 12” ( Underdog Records, 1980), and bearing cover art snapped at the bar of Bridge House that appears to be a homage to Hungarian photographer Brassai’s homoerotic “Un Costume Pour Deux” http://cs.nga.gov.au/Detail.cfm?IRN=76907 .

"Gott in Himmel Fraulein! Von't you get cold like zat?" 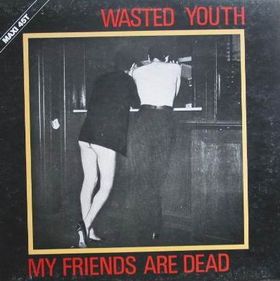 The drummer here is curiously listed as one “Andy Doll”. Since Wikipedia states that Andy Scott was a founding member, it’s probably not going out on a limb to presume this to be a pseudonym, and that Andy Doll and Andy Scott are in fact one and the same. I stand to be corrected.

Somewhere in between the first two singles, original guitarist Mick Atkins exits stage left and is replaced by Rocco, formerly with punk outfit Smak, and the stage is set for the first full-length album Wild and Wandering (Bridge House Records, 1981).

The album begins strongly with the nodding “Maybe We’ll Die With Them”, but then moves onto shakier territory with the nowadays politically incorrect “Housewife”, perhaps post-punk’s answer to The Rolling Stone’s “Mother’s Little Helper” (London Records, 1966), and follows through with the lyrically shakey ode to cougars “Games” that in turn seems to be post punk’s answer to Simon and Garfunkle’s “Mrs Robinson” (Columbia, 1968 – or better still, just watch the actual movie “The Graduate”, Columbia Masterworks, 1967).

All is far from lost however, as we move into the very Velvet Underground-esque “Pinned and Grinning”. “Wasted” follows, an intriguing song with most of the lyrics constructed from a pastiche of titles of 60’s rock songs. “Spot the Reference!” - it’s a fun game the whole family can play (as long as they were born some time during the upper Jurassic) and indeed one that would be repeated decades later by the high priests of Electro-Clash Miss Kittin and the Hacker in “1982” (International Deejay Gigolo Records, 2001).

Things take an exciting new turn however with what is indisputably the album’s strongest song, the gender-bending track “I Wish I Was A Girl”, a strange tale of adolescent desire involving wearing your sister’s clothes.

The next track “If Tomorrow” unfortunately does little and gets filed under filler/dirge but we have a welcome return to form in “Survivors Pt. 1”, returning once more to the cross-dressing theme. This topic would already seem curious in itself, but doubly so since drummer Andy Scott was also pounding the skins for punk band Cockney Rejects, a group more commonly associated with violent gigs and football hooliganism than anything remotely resembling transgressing gender boundaries.

Finally, Wild and Wandering then bows out with the very punk inspired, and again gay-friendly “Survivors Pt. 2” and leaves us on a strong note, one that must have been quite brave for the time in which it was recorded.


Maybe We'll Die With Them

I Wish I Was  a Girl

Wasted Youth leave us with a legacy of just one more album, The Beginning of the End (Bridge House Records, 1982), which I won’t claim to have heard, but gets a dishonourable mention for its cover art, neatly encapsulating everything that was aesthetically wrong with the early 80s in one single image. Things weren’t improved by the earlier single Wildlife (Bridge House Records) in which something very bad apparently possessed them to remake the cover art of Dynasty by Kiss (Casablanca Records, 1979).

It wasn’t all bad though, with the single Rebecca’s Room (Fresh/Bridge House Records, 1981) coming out with some splendid art work that actually epitomised the emerging Goth vibe quite perfectly.

Two of these album covers are embarrassing.
We'll leave it up to you to decide which. 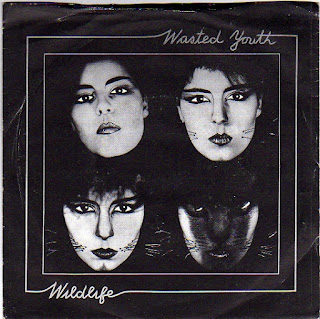 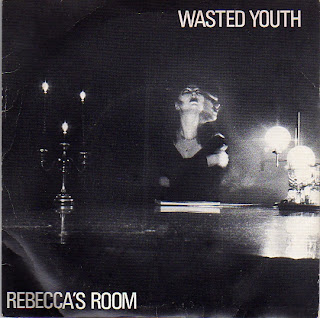 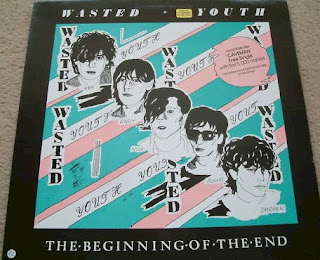 Track Listing
1.Maybe We’ll Die With Them
2.Housewife
3.Games
4.Pinned and Grinning
5.Wasted
6.I Wish I was a Girl
7.If Tomorrow
8.Survivors Pt. 1
9.Survivors Pt. 2 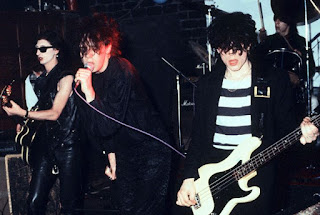