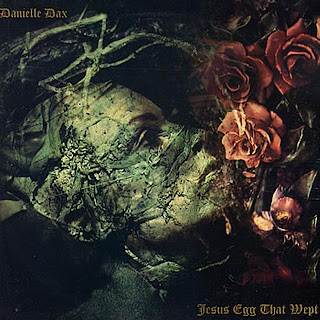 It goes without saying that Danielle Dax’s early works are very strange by any measure. The mini-album Jesus Egg That Wept represents her second solo effort after her earlier project, the experimental post-punk of The Lemon Kittens had ground to a halt. A much more coherent effort than the very eccentric Pop Eyes (Initial Records, 1983) that had proceeded it, and as such, constitutes much less of a cautionary tale on the hazards of combining folk & world music with powerful hallucinogens than did its predecessor.

Nevertheless, folks hoping for anything approaching mainstream are destined for disappointment here as Danielle  subverts New Orleans honky tonk ("Evil Honky Stomp"), 60’s girl bands ("Fortune Cheats"), and middle eastern sounds ("Ostrich") to her own nefarious purposes. Her own very  unique contributions are not absent here either with the voodoo / early zombie film evoking "Pariah" (possibly my own favourite of anything she’s ever done) or the Kate Bush-like "Hammerheads".  The album also includes a vastly improved version of “Here Come the Harvest Buns” originally found on Pop Eyes. The lush cover art is  provided by the immaculate Holly Warburton who would go on to illustrate most of Danielle Dax's later work.

I’ve often wondered quite how Danielle Dax came to be associated with the Goth scene since she quite clearly comes from a very different musical pedigree than most of the bands more often viewed as part of that genre. Nevertheless, she had the look, and played gigs at ’s infamous Batcave. The Goths liked her, and she evidently liked the Goths. Perhaps they adopted each other?

As Danielle Dax’s career progressed she would tend to become, not so much more commercial, but definitely more accessible. Dark Adapted Eye (Sire, 1988) is an excellent retrospective compilation, and those folks who prefer her more accessible work could do far worse than to consider Blast the Human Flower (Sire/Warner, 1990). It is however, light years away from the sheer strangeness to be found on Jesus Egg That Wept.
An excellent album albeit something of an acquired taste. 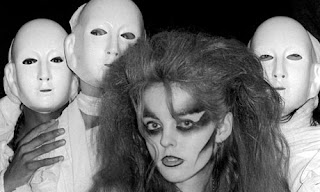