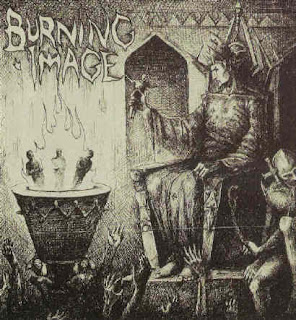 Of course, the term “Deathrock” for most people most readily conjures up images of outfits like 45 Grave, Christian Death and Kommunity FK.
Burning Image rarely get a mention, and indeed have been largely lost to memory. It must be admitted that in many ways, the band must bear some responsibility for this by virtue of their sole release when they were originally around being the self-released Final Conflict / Burning Image Burning 7” (1984) of which only 200 copies were pressed. Perhaps not the ideal way to immortalize oneself. 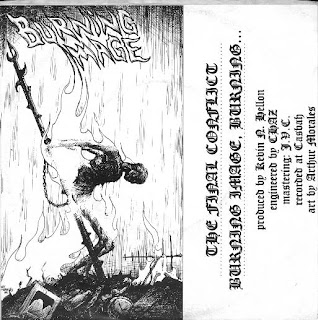 Confinement to the phantom zone of obscurity could easily have resulted, but for the interest of one Mr Jello Biafra Esq. who championed the band, allowed them many opportunities to open for The Dead Kennedys during the 80s and ultimately  released this compilation on Alternative Tentacles with essentially the same cover art as the original 7".
As compilations go, this is something of a strange one, not least because the title is slightly misleading with the last three tracks recorded after Burning Image’s reformation in 2003, but also because the strength of songs like “Prey”, “Time is Running Out” and “Shadows” serve to illustrate how relatively weak the songs on the 1984 single were. Really – why would anyone self-release their weakest songs as a single? Nevertheless, the compilation does make available not only the long lost single, but also all the demo tracks the band recorded over five years of existence.
Liner notes might be useful here – I don’t have a hard copy, and one suspects that the tale may be very revealing –  did they started out as a hard core band before merging into Deathrock? It would certainly explain much if we were to assume this compilation to be chronological. Certainly, hardcore punk origins would go a long way towards explaining both Jello’s interest and the (unusual for Deathrock) socio-political leanings of the lyrics.

Burning Image appear to have broken up or become dormant or some such not too long  after their now highly collectable 7” was released, but their website is a little scant on details. Like so much old that is new again however, they’re back, releasing the reportedly more hardcore Fantasma (Alternative Tentacles, 2009). Considering the almost totally different line-up, attempts to self promote themselves as "the band that wouldn't die" do seem like something of a stretch, but sooner or later, I’ll probably get around to tracking it down. 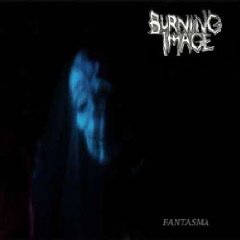 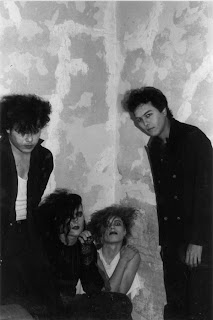