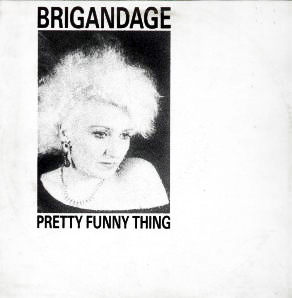 And so we come to Brigandage, once described as “the other half of the Positive Punk equation, the other half being Blood and Roses.” (I forget who said that – could it possibly have been that Mick Mercer chap?). Speaking of the mighty Mick, in The Gothic Rock Black Book (Mercer, Omnibus Press, 1988), he suggests the band may have originally been named Pistolian Brigandage, but I can’t find any other references to back this up.

Coming to public attention in 1983 via the now infamous and controversial NME article by Richard North (who would later join the band on bass) and the highly questionable South of Watford doco, they would go on to release “Hide and Seek” on Dave Sexgang’s The Whip compilation (Kamera Records, 1983) before a long period of silence.

The Pretty Funny Thing EP (Gung Ho, 1986) stands as the band’s only official release. That said, the NME article mentions a song called “Hope” that does not appear to have been recorded elsewhere, so clearly either demos or bootlegs were actively circulating at the time.

Opening with the obviously Velvet Underground influenced title track, we move quickly into more “Gothy” territory. Similarities with the Blood and Roses sound are clearly apparent here, yet despite this, the real musical similarities are, oddly for a outfit, with deathrock bands, most obviously 45 Grave, albeit stripped of the campy horror trappings.

Sadly, like Blood and Roses, Brigandage weren’t able to capitalize on their initial publicity and by the time this EP came out in 1986, tastes were beginning to change and one can’t help but suspect that this must have sounded quite dated.

Nevertheless though, while remaining Blood and Roses poor cousins, the Pretty Funny Thing EP does have charms on its own merits, and should you find yourself singing along to “Horsey Horsey” after listening to it, you shouldn’t be surprised.


Actual tracks from the EP are rare to find on Youtube, so "Horsey Horsey" is all we have, but a live concert bootleg filmed at Jon Fat Beasts’ Time Box  in 1986 in six parts has also been unearthed. Available evidence suggests it may have been one of their last.

Michelle went on to fashion design, examples of which can be seen on their website - her "wake me up before you pogo" shirt made me laugh a lot - although you probably need to be of a certain age to appreciate it.

Posted by James Von Sutekh at 7:05 AM