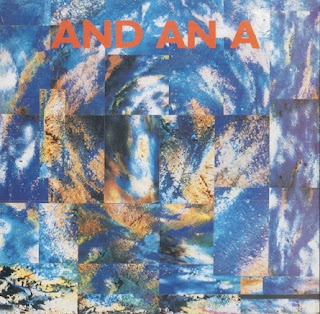 No trace of the Taken as Gospel / Haloes and Wings 12" is to be found on line.
Readers will have to enjoy this pic of my own copy taken with my very own hand,
using photographic skills that I optimistically describe as "modest". 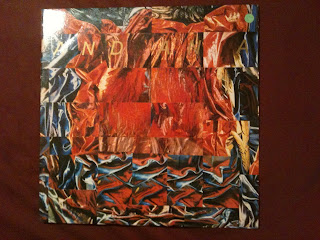 And so it comes to pass that I must finally get around to inspecting a contribution from my own home town.

Ahh! – home to countless bland indie-pop bands, embarrassing attempts at public art, and guys who fly in from the mines every Friday fresh from an intellectually stimulating week of digging stuff out of the ground.

The number of Goth/Industrial bands who have sprung out of this cultural backwater are almost legion. Some, like Janco’s Mask or the infamous Accelerated Men I might get round to reviewing at some point (I probably won’t though, ‘cause they do happen to be quite good friends of mine and I rather like getting invited to their soirees.),

And An A however, were something quite different. Much earlier for starters, and also one of the few Perth bands back then to actually release something more substantial than a demo tape.

When I saw them it was at what I suspect must have been their absolute final gig after a long absence at a party in Northbridge of dubious legality in the very early 90s. They were a two-piece then, and the Goth and Industrial scenes hadn’t yet fully crossed-over. It created a fairly unpleasant vibe – the Goth kids sitting and the more dancy Industrial crew trying to dance over the top of them, screaming “Fuckin’ boring Goths! Get the fuck out of the way!” as fingers, feet and knees were mercilessly, but rhythmically stomped upon.

At the time though, I had no idea at all how long they and their synth-driven goth-come-industrial stylings had actually been around for. Unfortunately, so little of their legacy has been documented anywhere, and such minimal information exists on their record sleeves that putting this entry together proved quite a chore, and many thanks are due to the help provided by my long-term partner in musical crime Mr Brad Smart esq.

Apparently starting up sometime around 1981, the artiness of And an A must have come as something of a shock to at a time when only cover bands got gigs. The original band line-up seems to have actually employed real live drummers, sometimes to beat the crud out of a 44 gallon drum, much to the horror of uninitiated sound mixers. The drummers, for various reasons didn’t last and were ultimately replaced by a rather more reliable drum machine.

“When holed up for the night in Mullawa, a racist spec 100 ks east of Geraldton, he had a conversation with the publican’s son that went something like this:
Red-haired Publican’s Son: Youse from the city, eh?
Paul Cumming: Um…yeah.
PRHS: I went there once. Went to a nightclub and everything.
PC: Oh…good for you.
PRHS: Yeah, saw a band.
PC: Oh. OK. Who were they?
PRHS: I dunno. They were fucking shithouse, but.
PC: You don’t remember what they were calle…
PRHS: Ah yeah. Andana
PC: Who?
PRHS: Andana. Fucking shithouse.
PC: Oh, And An A…yeah, um, I was in that band.
PRHS: Oh. (Pause). But you weren’t the drummer, eh? Fucking dickhead was using a ball-peen hammer on a 44-gallon drum!
PC: Um yeah, I was the drummer. That was me.
PRHS: Oh. (Long pause). Jeez, youse were fucking shithouse.”

Ah, Western Australia, how do I love thee, let me count the ways (This shouldn't take long)

Moving right along, and we arrive at the mid 80s with a much more refined outfit and two quite brilliant synth-driven 12”s, the first of which, “Affirmation / Ambition” is known thanks to Discogs.com to have been released in 1985, and a second, lesser known “Taken as Gospel / Haloes and Wings” which we must assume to have been released shortly thereafter. And An A may not have ever achieved world dominating fame, but even these days, both Affirmation and Haloes and Wings can occasionally be heard given a spin in alternative venues, much to the delight of the old guard.

It does seem quite unreasonable to accept that all trace of these 12”s magnificence to be left forgotten, so for this once, I’m going to abandon this blog’s usual policy and actually provide a download. Both 12”s! Grab ‘em now you lucky lucky people and experience the long gone joy that was And An A!

Rumour has it that there may have been a third release, possibly an EP or possibly even a CD, depending on who you listen to. May have been titled something along the lines of “Earth am Flat, Sun do Move”, but apart from the rather vague link below, history appears to have erased all trace of it.
Such is…well….death.
Here’s to resurrection.

Email ThisBlogThis!Share to TwitterShare to FacebookShare to Pinterest
Labels: Affirmation, Ambition, And An A, Goth, Haloes and Wings, Industrial, Perth, Taken As Gospel