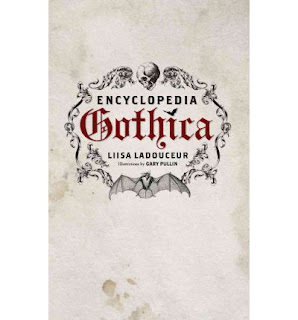 And now for something completely different as Plunder The Tombs turns its hand to book reviewing.

In Encyclopedia Gothica, what Canadian Goth journalist and poet, Liisa Ladouceur has given us is quite simply delightful. This is not really a book about music as such, and nor thankfully, is it another risible tome about “how to be a Goth”. (Actually, at some point in time, I might get around to starting up a Hall of Shame for those kind of books.)

What we have here is really a vocabulary of the scene, which easily could have been a terribly dry read, but is actually written with refreshing humour and a light-hearted tone that doesn’t try to take itself with Poe-faced seriousness.

The Encyclopedia covers important individuals, bands, festivals, hairstyles, zines, nightclubs, a whole horde of miscellania, and perhaps most usefully the odd terms used in Goth scenes around the world. Even sleepy old got a look-in with the inclusion of POGS (Post Office Goths), although it’s less clear if Ladouceur realises this was a mainly derogatory term used by older Goths to refer to the mostly clueless youngsters who used to gather in Forrest Chase. It’s also somewhat redundant with the POGS having been driven forth some years back from their traditional ground by aggressive hip-hop crews and are now usually to be found loitering by Wesley Church on the corner of William and Hay Streets. Nevertheless, it’s always nice to be included. But I digress.


Perth has a long and undistinguished history of knocking down it's
historical buildings.The General Post Office was an exception however.
Little wonder it became a magnet for under-aged Goths. It effectively won by default. 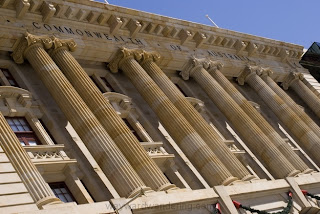 On the whole though , I think the real strength of this beautifully presented volume lies in it’s exploration of terms that differentiate the various strands of the Gothic subculture, whether it be “Trad Goths”, “Mall Goths” “Fairy Goths” or “Cyber Goths”.

It is however, at its weakest when discussing the subculture at its musical level, with band coverage being a little bit hit and miss, and giving Cybergoth far more of a pass and legitimacy than I would ever have credited it. It does get  much love though for introducing me to the brilliant Fever Ray (seriously, I own every album The Knife released - how on earth did this one fly under my radar for so long?).

In the end though, it doesn’t matter – that Mick Mercer chap has already published at least five books detailing bands and Encyclopedia Gothica is both essential, informative, and above all, fun.
Recomended.

Watch an interview with Liisa here