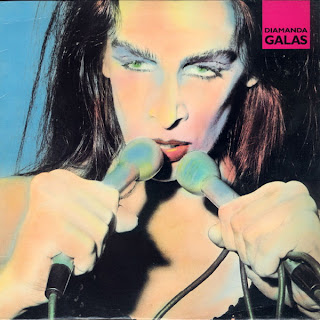 We have of course discussed the works of Diamanda Galas before, but her period before the Masque of the Red Death trilogy (Mute 1986-1988) is worth discussing too.

Her early works with composers Vinko Globakar and Ianis Xenakis are probably no secret to fans of avant-garde opera. Similarly her early guest appearance with Jim French (If Looks Could Kill, Metalanguage, 1979) is probably well known to followers of leftfield contemporary jazz.

Her first solo release (or at least official first) was the Litanies of Satan 12” (originally on Y, 1982, but later re-released on a number of labels, most notably Mute, 1989) is so notorious that it’s barely worth commenting on, beyond adding that it is one of the most out-there things you are ever likely to hear, side A being a rendition of French decedent poet Charles Baudelaire’s poem of the same name, and side B “Wild Women With Steak Knives” being a jolly little hymn to the joys of schizophrenia.

I suggest you get a hold of it – wonderful for taking revenge on annoying neighbours, clearing the house of party guests who have outstayed their welcome or terrifying household pets. (As an aside, on most versions of Litanies of Satan, the track listing is back to front. The number of commentators over the years who have missed this is simply astounding. The title track is the one in French – it’s not difficult to work out FFS.)

The original release on Y records (1982) 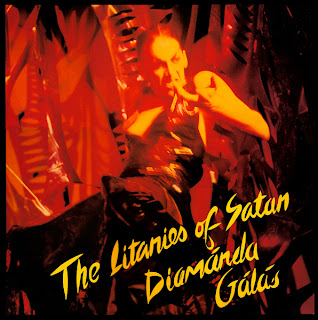 What’s not so commonly realised is that sandwiched in between the Litanies of Satan 12” and the Masque of the Red Death project there is a long lost album, long deleted, hard to find, and vinyl copies in good condition quite expensive.

This is the self-titled album, sometimes known as “The Metalanguage Album”, but most commonly known as “Panoptikon”. This is much in the same line as Litanies of Satan – two very long tracks of experimental scary electronica each occupying a side to themselves, and of course, Diamanda’s multiple microphone madness continues. I'm not sure you could classify this as "Goth", but trying to classify it as anything else would be equally problematic. The first track, “Panoptikon” is based on the prison experiences of Jack Abbott, while exploring the slightly sinister ideas of Jeremy Bentham, a prison in which all inmates could be observed at all times. On the second side we find “Tragouthia Apo To Amia Exon Fonos”.  (A Song for the Blood of those Murdered), Diamanda’s tribute to those who suffered under the Greek Junta. 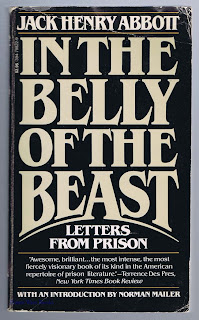 I think that it’s important to note that while Diamanda will forever be associated with her work dealing with the AIDS pandemic, themes of persecution have always been central to her art. The specific topics dealt with on this album are ones she will return to years in the future: treatment of prisoners in “Iron Lady” on Malediction and Prayer (Mute, 1998), dedicated to Aileen Wuornos, and mass persecution on “Defixiones: Will and Testament” (Mute, 2003), a piece dedicated to the Armenian, Greek and Assyrian genocides that took place after World War One, a chapter of history swept under the rug when acknowledging it proved inconvenient to re-uniting Europe after the war.

Why on earth was Panoptikon deleted? When I interviewed Diamanda on college radio back in 1992, I asked her if there were any plans to re-issue it to which she responded

“No, I’ve never been satisfied with the production values on that recording”.

Although I’ve occasionally wondered if that was the complete story, it was a pretty definite “no” and twenty years on, and almost thirty years since the album’s release, its chances of ever being reissued seem ever more remote.

Personally, I think that’s rather a shame, so in the interests of posterity, here it is: 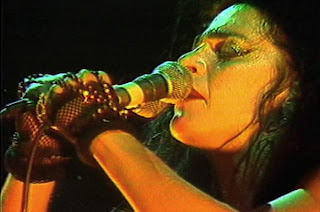 Posted by James Von Sutekh at 3:33 AM