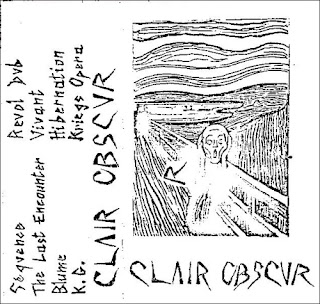 For a band almost unnoticed outside of French arts circles, Clair Obscur has been a surprisingly prolific outfit over the many years of their on again-off again existence.


Much of their later material from throughout the late 80s and 90s remains easily obtainable through the wonderful world that is teh internetz. However, exposure to the experimental neo-classical music of their albums of this time, although beautiful in their desolate ambience, could well leave the novice listener wondering what this could possibly have to do with Goth?


More mysteriously still, what possible connection it could have to the band’s frightening reputation for performance-art stage shows involving simulated rape, toilets and audience participation?


The answer involves, as that great prophet Kylie Minogue would say, “a step back in time.”
Formed in Creil in 1981 by Thierry Damerval and the brothers Demarthe, early Clair Obscur was a much darker entity that bore little resemblance to what would eventually follow once the band began recruiting classical and jazz-trained musicians into its ranks. Nevertheless, the band was always coming from the more performance oriented end of the spectrum.
Discogs.com thinks this is the original cover - I could be wrong, but intuition
& production quality suggests that the inferior b/w print
is actually the original release and this is the tape that was re-released
by Pleasantly Surprised in 1985. I stand to be corrected. 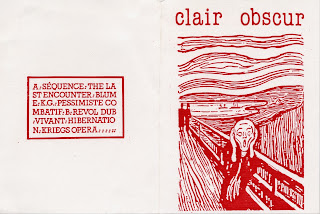 La Cassette Noir was Clair Obscur’s first official release following on from a demo tape the previous year. We are greeted with the ominously thunderous “Sequence” before moving swiftly into the oppressive threat of “The Last Encounter”. “Blume”, the compelling “K.G.” and war-dancesque “Pessimiste Combatif” follow with a trio of short atmospheric pieces closing the experience.


If The Black Cassette is reminiscent of anyone else, then The Virgin Prunes would most readily spring to mind although the comparison is a superficial one. Evidence of the hand of Joy Division and Bauhaus at work are also evident here although not perhaps as markedly as on the 1981 demo tape.
“Atmospheric” is the operative word in describing this terrifying yet gripping example of art-house post-punk. If one was hoping to be dragged onto the dance floor with black hole like force then La Cassette Noir is going to disappoint (Although later singles like the unforgettably titled Smurf in the Gulag (Cathexis Recordings, 1986) may well delight in this regard).

Clair Obscur had something of penchant for re-recording/re-interpreting
certain songs throughout their career, in some cases multiple times. "Blume" and
"The Last Encounter" are cases in point. The versions below are much later
(and tamer) versions than those which appeared on La Cassette Noir.
You can hear the originals on the band's Myspace site - I'd post them here, but sadly
Myspace and Blogspot appear unable to play together nicely.

The only damp squib on the otherwise outstanding La Cassette Noir is indisputably the reverse recorded Revol Dub which with a bit of manipulation with Audacity software turns out to be “Bad Lover”, one of the lesser tracks from the band’s earlier demo tape played backwards. The result really doesn’t add anything to the experience and in point of fact is basically irritating, so one has to ask what possessed Clair Obscur to think this was a good idea?


Were they trying for weirdness purely for the sake of being weird? Or were they trying to cheaply pad out the tape to something approaching full-length? Or were they in fact poking fun at the then nascent obsession of the religious right with backwards Satanic messages supposedly hidden in rock music? (No, I really couldn’t make this shit up if I wanted to. If you’re too young to remember that ludicrous debacle, go here ).

Whatever their intention, the result does little save annoy the listener. Let us not forget that the item in question was a cassette; the only way to deal with Revol Dub was either to endure sitting through it (the longest track on the entire tape BTW) or to fast forward and attempt to guesstimate where it might end – obnoxious by anyone’s estimation.
If one can overlook this though, it matters little, because La Cassette Noir is both essential and excellent listening for anyone with a genuine interest in early Goth. The band would follow through with two brilliant if more accessible self-released singles 7” (1983), Dansez 12” (1984) and then the live album The Pilgrim’s Progress (All The Madmen Records, 1986). All are highly recommended and happily Kruptobolo has placed what is in effect downloads to all of the band’s back catalogue on their blog.
Go. Go now.
“From the most tribal cold wave to chamber music, from industrial music to dance music (unless these two are synonymous), their musical approach is eminently atmospheric and embraces a surprising variety of styles, giving birth to iconoclastic scenic transcriptions.”- David Sanson
After an absence of new studio material for 11 years, Clair Obscure are back too, shedding the neo-classical influences with the relatively accessible We Gave a Party For the Gods and the Gods All Came (Optical Sound, 2009). Fans of the more danceable facets of Einsturzende Neubauten or left-field electro like Askii Disko will find much to appreciate here. It too is recommended.
The official site suggests that earlier this week, the band released We Gave Our Music to the Gods and the Gods Remixed it (Optical Sound, 2010) – something to look forward to.

Track Listing:
La Cassette Noir was later re-released as an untitled cassette (Pleasantly Surprised, 1985) and again in its entirety as an LP along with the Dansez 12” (self release, 1984) as Play (Cathexis Recordings, 1988).


Recent pics suggest that Clair Obscur's contemporary
performances may have restrained themselves considerably: 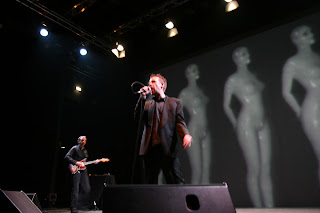 But back in the day, one suspects their live
performances must have been rather confrontational: 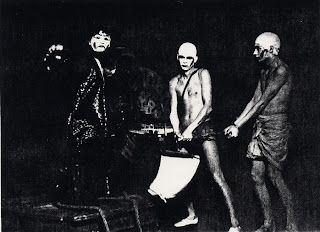 Posted by James Von Sutekh at 6:21 AM