Kommunity FK – The Vision and The Voice (Independent Project Records, 1983) 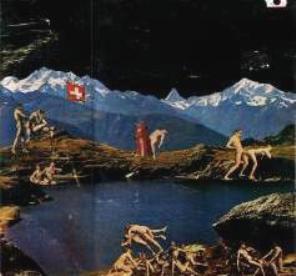 Another trip on the Way-Back Machine, this time to Los Angeles 1978 where we find a young man, Patrick Mata becoming increasingly disenchanted with the LA punk scene. Heavily influenced by ’s “ period” and Dadaism, Patrick’s frustration with having no bands really reflecting what he and his clique were into led him and his girlfriend into developing a band of their own, despite their self-confessed modest musical abilities.
The plan seems flawless, until the duo discover they can’t find a venue that will give an outfit so far removed from the mainstream LA punk scene and so immersed in “doom and gloom” a gig, or for that matter, the time of day. Concluding that the LA music establishment is in fact one huge community fuck, the group adopt the name “Kommunity Fuck”, but coming to the realisation that this is even less likely to attract gigs, swiftly abbreviate it to “Kommunity FK”.
Exactly how the group’s fortunes were turned around remains a little unclear, suffice to say, that gigs did eventually come and Kommunity FK managed to enshrine themselves as one of the biggest names in the history of LA Deathrock, eclipsed only by 45 Grave and Christian Death.
The Vision and the Voice would eventually emerge in 1983 as Kommunity FK’s debut album, at once sorrowful, dreamlike and fueled by anger, it remains comfortably seated as one of the cornerstones of American Deathrock. Taking its name from the writings of occult mystic Aleister Crowley (the title relates to Crowley’s "Liber CDXVIII" for those who take an interest in such things), the cover art consisted of a collage by Patrick Mata, itself entitled “Kommunity Fuck” and proudly displaying a big red phallus as its centre piece.
Opening with the confrontational (but now more true than ever) “Restrictions”, the album moves through both the aggressive and the introspectively mournful, with the early and much more hardcore-influenced “Fuck The Community” as a mid point before we reach the climactic finale of “We Will not Fall” which would effectively became both the band’s signature tune and a rallying cry to the Deathrock subculture.


Some fans were especially dedicated... 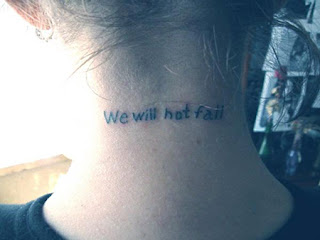 Although Kommunity FK would only release one more official studio release during their original incarnation (Close One Sad Eye – Independent Project Records, 1985), it’s not commonly realized that a live album from this period is also available (Kommunity FX: The Krypt, Los Angeles,CA, 1984 – Invisible, 2006) which comes highly recommended. To the best of my knowledge, the wee beasty was never physically pressed and is only available by download. iTunes and, (depending of which country you have the dubious fortune of residing in) Amazon both have it. 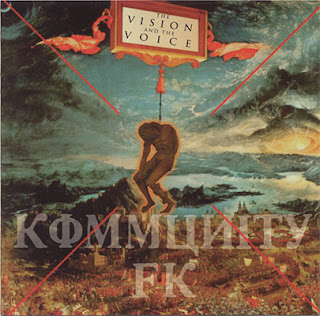 The next and this time, apparently official, re-release came via Mobilization Records (2006). Mysteriously, they opted to retain the Cleopatra version of the track listing. They did however return to the original cover art but feeling terribly coy, made a feeble attempt to conceal the now fabled “big red cock” by superimposing the album’s title over it. Honestly, around 50% of the human race have got one, and most of the rest have at least seen one – what exactly is your problem? 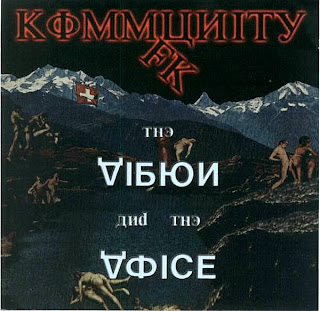 I’m not quite sure what it is about right now, but it seems to be quite the time for comebacks. Kommunity FK are back too and accompanied by a splendid CD, La Santisima Muerte (Kommunity PM  Records, 2009). The cover art is once again a Patrick Mata collage. I notice he has very wisely avoided any penises this time around, but for those who found the Aleister Crowley reference to Vision and the Voice interesting, an investigation into the origins of La Santisima Muerte (residents of Mexico excepted) should blow your tiny minds. 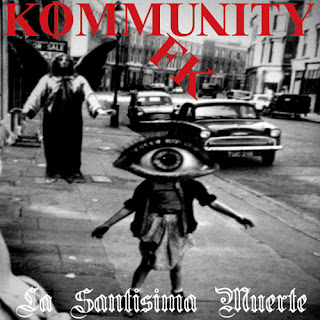 Track Listing:
Later re-releases on CD have tracks appearing in a different order. The Mobilzation Records Version (2006) also includes live versions of “Tribulations”, “Unknown to You”, “Restrictions” and “To Blame” as bonus tracks. 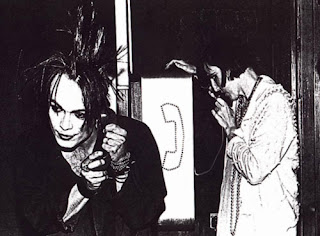 Line Up: Patrick Mata, Sherry Rubber (both apparently doing pretty much everything. Other musicians may have been involved, but whether they were actual members or hired guns is less clear. Better info is welcomed.)
http://www.kommunityfk.com/
http://www.myspace.com/kommunityfk
http://en.wikipedia.org/wiki/Kommunity_FK
http://www.deathrock.com/kommunityfk/
Posted by James Von Sutekh at 6:37 AM