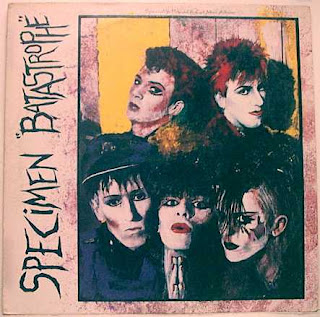 It would be easy to ridicule Specimen if one was to approach them from the point of view of a serious music critic, but to take that stance would be to completely miss the point.
There was nothing profound or deeply artistic about Specimen, they were purely and simply a goth party band who made an artform out of campy tackiness with androgenous sexuality set to overdrive.
The origins of Specimen are to be found in in 1980, formed by vocalist Ollie Wisdom and guitarist Jon Klein. They soon relocated to where in 1982 Ollie launched the now infamous Batcave club (a story that will have to wait for another time, although interviews with Jon Klein suggest that Specimen viewed the band and the club as different legs of the same dog). Seeking to make Specimen the house band, Ollie put the hard word on a club patron  Jonny Melton, later known as Jonny Slut, to play keyboards for them. As Jonny tells the story:
“First week I went to The Batcave I thought it was brilliant…I went the second week and was approached by Ollie Wisdom who said, ‘Do you want to join our band?’ I said ‘Oh, I can’t play anything!’, He said ‘That doesn’t matter, you’ve got nice hair’” (Gothic Rock, Mick Mercer – Pegasus Publishing, 1991). The rest is history.
Jonny did indeed have very nice hair, and his legacy to the scene, if not musical, became the prototype of what has retrospectively become known as the “deathhawk”, and he overcame his self-confessed musical inadequacies by putting guiding stickers on the appropriate keys of his keyboards. 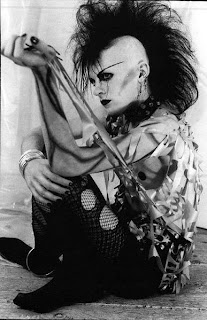 Specimen meanwhile had a quite substantial catalogue of songs, as revealed by posthumous compilations like Azoic (Jungle Records, 1997) and Warm Wet Clingfilm Red Velvet Crush (Cleopatra, 1997), but released surprisingly little during their original existence, The Batastrophe EP and a handful of  singles and 12”s being their entire output. 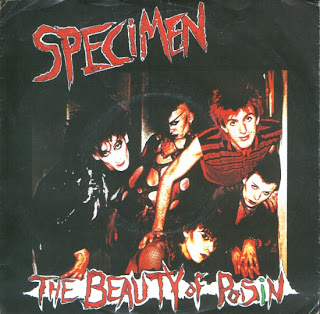 The Beauty of Poisin (sic) and Returning From a Journey 12", both through London Records, 1983 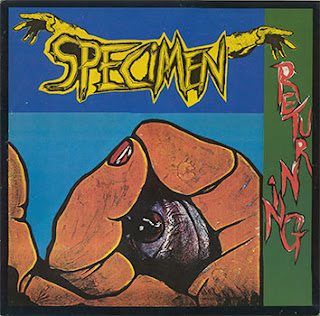 Although Specimen's most defining statement of intent was
indisputably the decision to release the Returning 7" in this distinctive format: 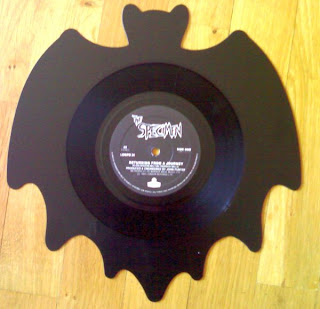 Feeling the decline of the Batcave style of Goth, Ollie attempted to transport the band to America, but Jonny Slut apparently didn’t want a bar of it and the original line-up split in 1985: “after Sharp Teeth Pretty Teeth (7”, The Trust, 1985), I just knew I didn’t want to go to San Francisco. Fuck knows what would have happened if I’d been out there broke, at the mercy of… Ollie, or what ever.” (Gothic Rock, Mick Mercer – Pegasus Publishing, 1991). Jon Klein went on to join Siouxsie and the Banshees, and Jonny Slut (in a career remarkable for someone who “can’t play anything”) popped up in KLF, Adamanski, Diskord Datkord, Sadodada, Atomiser and as prime mover and shaker for London Club Nag Nag Nag driving the UK arm of the sadly short-lived Electro-Clash scene.
Meanwhile, Ollie Wisdom ended up DJing raves and dance parties, a tale which leads us into anecdote corner when somewhere around ’97 my housemate’s brother actually found himself DJing alongside Ollie at a dance party in . Absolutely astonished, I asked him if he knew who Ollie Wisdom was and discovering he had no clue about Ollie’s  Goth past (or for that matter, his even more oscure punk tampon-wearing past with The Unwanted), played him . They guy evidently had a sense of humour and in the middle of Ollie’s set snuggled up next to him and suggested he “turn it up up, turn it up up up!”  Ollie was apparently less amused and turning to him with a withering look of doom informed him; “You’re… very… fucking… funny.” But I digress….
Specimen did eventually reform – initially with Jon Klein as the sole remaining original member, and released Electric Ballroom on Metropolis in 2007 with some minor contributions from Ollie and Jonny Slut. The entire original line up reformed the following year and released Alive at The Batcave on Eyes Wide Shut Recordings.

Considering all the early Goth bands that seem to be reforming, a 2008 interview with Jon Klein makes for interesting reading:
Q: “Many of the bands that began back then with you are still around, either in their same band sense or doing solo careers. Recently Bauhaus released a new album "Go Away White" after 25 years. What’s your opinion? Do you think it is only nostalgia or is it like a music life-force growing and maturing constantly?”

Jon Klein: “I like it when bands are able to survive. I haven't had the time to really penetrate the Bauhaus album that thoroughly, though the last show I saw in  a year or so ago was really powerful. I don't think it's only nostalgia. For sure there's some nostalgia, it's only natural (music can glue itself into memories the same way that smells can) ....but I just saw a really great band do a great show. Some people I'm sure do it for the attention, some for the money, but many do just because they have to make music..... it's just what they are and they do.... yes maybe a musical life-force.” http://www.postwave.gr/index.php?option=com_content&task=view&id=883&Itemid=10&limit=1&limitstart=1 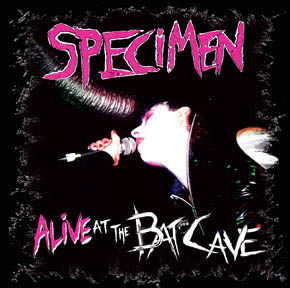 What more can I say? Specimen were simply tremendous fun. A complete and devastating rebuttal to those who attack Goth of being all depressing and suicidal. To accuse them of being all style in lieu of genuine substance is best left to the Grinches and while I’m on the subject, Merry Christmas to ya all! 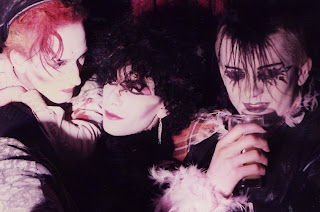 And last but not least, a brief interview with Jon Klein and Ollie in which Jon's hair and nose vie for supremacy:


http://www.youtube.com/watch?v=GTqF6nhJjSU&feature=related
Posted by James Von Sutekh at 5:54 AM