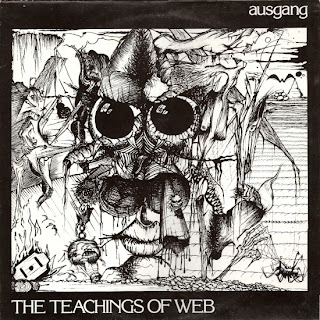 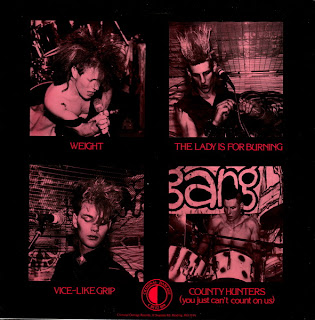 Yesss….Strong with The Birthday Party this one is - hmmmmmmmm.
Needless to say, Ausgang were one of a number of first generation Goth bands to be heavily influenced by the early doings of and his cohorts.
Beginning life in an earlier incarnation as Kabuki they released a solitary 7” “I am a Horse” / “My Hair” (Kabaret Noir, 1982) before deciding a name change was in order and that Ausgang seemed an appealing alternative.
As vocalist Max put it:
“In '82 we ditched the art, the backing vocals, the synth and the drummer (but got a new one, Ian) and got back to basics, ie, a post-punk, pre-goth, Stooges/Birthday Party-like nightmare which fused drugs, sex, motorcycles and twisted rock'n'roll in equal measures. It was only after we made this move that we realised there were other outfits operating in a similar vein - Sex Gang Children, Alien Sex Fiend, Skeletal Family, Gene Loves Jezebel, Specimen, etc. We were not alone. And what with live shows that teetered on violence and madness, a porn-infested fanzine and a dedicated, rabid following, who could ignore our dark potential?”
The Teachings of Web was the band’s first EP (or could it be a 12”? The difference often seems a little arbitrary) came dangerously equipped with oddly disturbing cover art that somehow managed to combine surrealism and arachnophobia with sex and shotguns.
Although The Birthday Party’s influence here is obvious, most clearly on “Vice-Like Grip”, a song whose bass line bears more than a passing nod to TBP songs like “King Ink”, the band was clearly more than a mere carbon-copy, being less chaotic and murky, and rather more, well…sexy and fun – in so far as “fun” can be used in this sense, but then what’s not to like about a bunch of skinny Goth boys who liked to cavort around stage sans shirts?  It’s probably easier to just look for yourself:

1982 was a busy year for Ausgang, also kicking out the “Head On” 12” and the “Solid Glass Spine” 7” (all on Criminal Damage) before a full length album (Manipulate, Fourth Dimension Records, 1986) finally materialized. 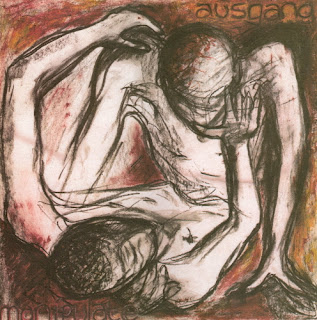 Two smaller releases would follow before they would change their name to Ausgang Au Go-Go, in an apparent attempt to shed the “gothic” tag they had acquired. This strategy somehow didn’t seem to work and Ausgang Au Go-Go dissolved after one EP Los Descamisados (Shakedown Records, 1987). A large, but incomplete collection ranging from the Kabuki period right up to Ausgang Au Go-Go would eventually appear as the excellent “Last Exit…The Best of Ausgang” (Anagram, 2001).

Ausgang reformed in 2003 and played a number of gigs in and the States. A new album, albeit mostly of rerecorded old material, Licked (Shakedown, 2005) also appeared however, not being available on either iTunes or Amazon.com and with the shop on the band’s official site currently down, locating a copy could prove quite a challenge. You may have to hunt ya down (see what I did there?) one of those naughty bit torrent thingies. 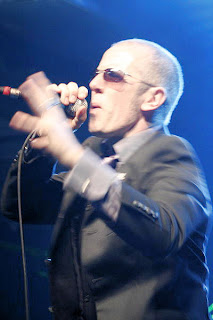 That infallible font of wisdom that is Wikipedia reckons they’re still going, but I can’t personally locate any evidence to suggest they’ve been active since 2007. I stand to be corrected.
Track Listing:
1. Weight
2. The Lady is For Burning
3. Vice-Like Grip
4. (You Just Can’t Count on Us)

Last Exit...The Best of Ausgang (Anagram, 2001) also includes: I am a Horse, My Hair, Strip Me Down, Sink Into You, Lick, Hunt Ya Down, She Lacks Discipline, (You've Got the) Hots for Christ, Here it Comes, Fat Vigilante, Head On!, Pumping Heart, 4 Tin Doors, That Heat, Let Me Say (Then Have it Your Own Way), Crawling the Walls, King Hell, Turn-On Tonic. 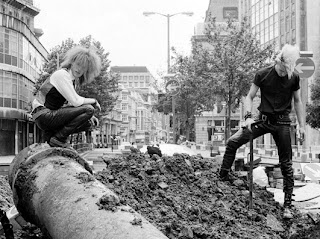