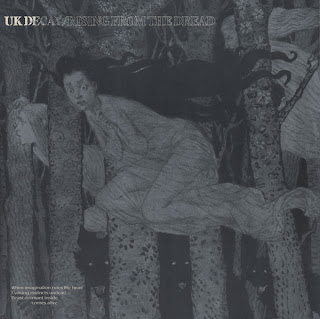 These days, it’s a popular misconception to attribute “Goth” as having its raw seeds sown in the (presumably flat) field of Bauhaus. Lost in the mists of time though is that Luton’s UK Decay actually beat Bauhaus to the post with their first single, a split with local punk outfit Pneumania (Plastic Records, 1979) preceding Bela Lugosi is Dead by the narrowest of margins and then repeating the trick with The Black EP (AKA: The Black Cat, (Plastic Records, 1980)) hitting the stores just a few months before In the Flat Field. An interview with journalist Steve Keaton would prove strangely prophetic:

"Abbo, told me that they had a fascination with death (he was laughing at the time) Even so their imagery is striking and the music is thick with Victorian menace - and Banshee/Antz spice Could this be the coming of Punk Gothique? With Bauhaus flying on similar wings could it be the next big thing?"
Sounds, 1981

The Rising From the Dread EP ("Dread" not “Dead” despite what Wikkipedia and the band’s own album liner notes would have you believe), one of the band’s later releases, sees UK Decay at the height of their powers. Comparisons with Bauhaus are inevitable, both possessing a similar style both instrumentally and vocally, yet UK Decay seemed to have so much more “oomph” if you will. Similarities with Siouxsie and Adam and the Ants are also obvious, underscoring why UK Decay had such a vital role to play as the natural “missing link” between post-punk and what would come to be known as “Goth”.

Stylistically speaking, Rising From the Dread is light years ahead of UK Decay’s earlier works which, while enjoyable in themselves, often had a tendency to cross the fine line that lies between being archly dramatic and the unfortunately (or perhaps intentionally?) absurd. If one can ignore the somewhat annoying two and a half minutes of pointless noise that commences the beast, Rising From the Dread remains powerful, catchy and brilliant.


The brilliant artwork on the
rear of Rising from the Dread. 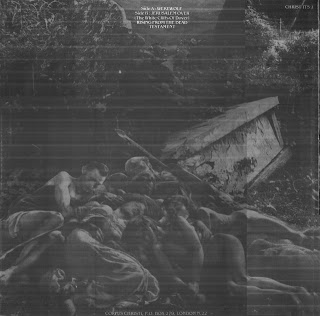 The band reformed a few years back and for those lucky enough to dwell in can now be seen performing the festival circuit. For people seeking more detail, an extensive and revealing interview with vocalist Abbo can be found in Mick Mercer’s book “Gothic Rock” (Pegasus Publishing Ltd, 1991). A post-reform interview is also to be found at the musicthatjumpedtheshark.com link below.

Recently, UK Decay re-released the full length album For Madmen Only (originally on Fresh Records, 1981) on CD (UK Decay Records, 2009), including the Rising From The Dread EP and a number of other tracks.While Bauhaus and other bands may have refined the style, and arguably done it better, UK Decay nevertheless did it first. Well worth owning for that reason alone. 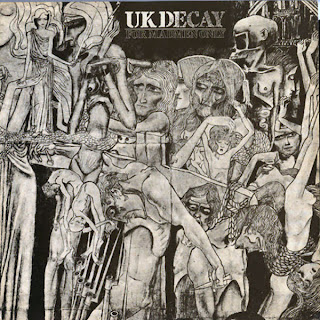 Track Listing:
1. Werewolf
2. Over (The White Cliffs of )
3. Rising From The Dead
4. Testament

The CD Release of For Madmen Only also contains: Duel, of the Elements, Shattered, Stage Struck, Last In the House of Flames, Unexpected Guest, Sexual, Dorian, Decadance, Mayday Malady, For Madmen Only, Barbarian, Black Cat, Unwind, For My Country.

Their first release, the "Split" 7" with Pneumania (Plastic Records, 1979). The tartan trousers providing vital evidence that what would become the established "Goth Look" may have taken some little time to develop. 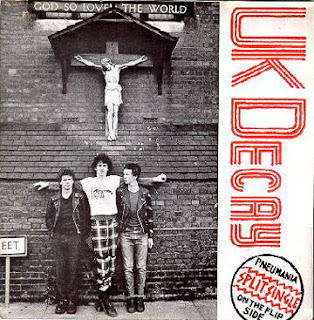