Into a Circle – Assassins (Abstract Records, 1988) 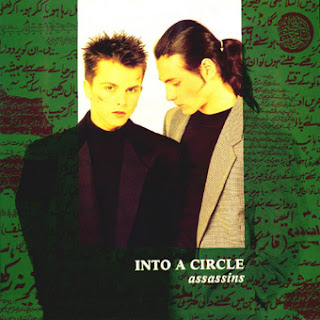 Formed by Bee (aka: Paul Hampshire) and Barry Jepson escaping from the short-lived Getting the Fear (in itself formed from the ashes of Southern Death Cult) in 1985, Into a Circle never really attained the recognition they deserved. Sometimes known as In Two a Circle, or even In2a0, Assassins was the only full length album they ever recorded, ostensibly released in 1988 but in actuality, most of the material on here was recorded several years earlier. The re-released CD on Cherry Red’s Goth Collectors Series is worth owning as it includes all the duo’s singles as bonus tracks and so apart from a few B-sides effectively represents everything Into a Circle ever officially released. The often extremely frank liner notes on the re-release are also worthwhile, providing detailed and often explicit insights into the motivations underlying the pair’s music. 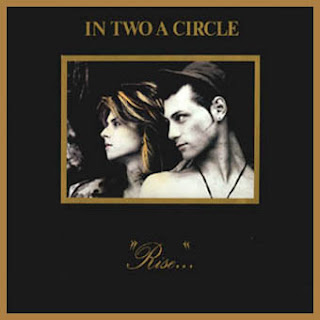 The topics that fascinated Into a Circle orbited largely around the philosophies and writings of Brion Gysin & William Burroughs, incorporating alternative sexualities (“Under Mikhail”, “Flow”), S&M (“Tender Skin”, “Rise”), drugs ("O’Siren", "And In Flames") and religion (“Allah Akhbar” – itself originally a song from the Getting the Fear period). A heady mix, that in less talented hands could easily have produced a sensationalist and bombastic assault. In the hands of Into a Circle however, Assassins emerges as a beautiful and highly introspective piece of hugely under-rated Goth with backing vocals provided by Rose McDowall of Strawberry Switchblade.

Things couldn’t be sustained however, drugs and an already difficult relationship with Abstract Records exacerbated by the duo insisting on total control over all aspects of music, production and artwork saw Into a Circle implode. Barry now works as a tour manager in the and Bee relocated to where he works in various electro bands including Futon & Goo with former Suede drummer Simon Gilbert.
For punters not content with Assassins, a live bootleg (2nd generation cassette) is available for free download.
Track listing:
Bonus tracks on the 2008 Cherry Red re-release:
Lineup: Bee (vocals), Barry Jepson (guitar & bass), Rose McDowall (backing vocals), various uncredited session musicians.
http://www.myspace.com/intoacircle
http://en.wikipedia.org/wiki/Into_A_Circle
http://www.archive.org/details/in2aO1987-03-18..flac16
Posted by James Von Sutekh at 2:42 AM