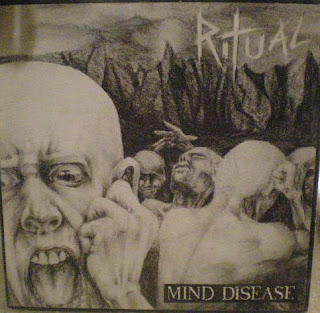 Starting up in ’79 gives Ritual undeniable status as one of the first bands in the post punk movement to have begun venturing into the dark places that would become Goth. Journalist Mick Mercer speaks highly of them albeit briefly – a shame really, because other available information is scarce indeed. These two singles represent the only official releases by the band although a demo tape and a Peel session both took place before their release.
All of which brings us to the Mind Disease 7”. Goodness, this is a little rough, especially if you haven’t prepared yourself for some fairly low-level production, and the overall effect is not helped by what might be politely described as Errol’s modest vocal abilities. Nevertheless, it does grow with repeated listens and the beast kicks along with a pleasing punky urgency, in places oddly suggestive of some of what New Model Army would do in a much more refined way just a few short years later. 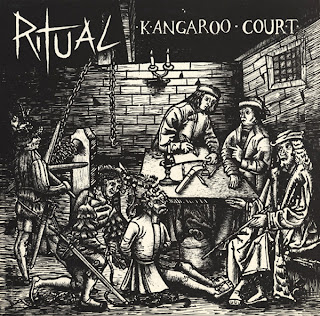 The Kangaroo Court 12” though still rough, is considerably better, both in strength of song writing and production values. Slower on the whole but with a driving aggressive drum sound, this is welcome stuff. “Brides” does indeed please, “Conscripts” perhaps less so, but the real gem here lies in the final track “Questioning the Shadow” leaving the listener to ponder what heights Ritual could have reached had they continued, possibly with a more gifted vocalist.
Apparently Ritual went on to record a full length album known as Songs for a Dead King which remains officially unreleased to this day although a demo tape version exists,and while I won't discuss it at this point, the curious will find a link to a download below. 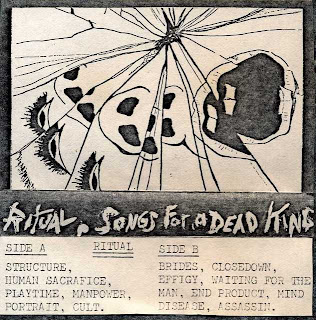 The use of saxophone on both of these singles is interesting – it isn’t an instrument usually associated with Goth-rock (although from recollection, an early incarnation of The Nephs did experiment and the Sisters did incorporate one into “Dominion”), but Ritual certainly employed one to full effect. I say “interesting” because this was a trait also shared by their much better known contemporaries Theatre of Hate. Yet, in this instance, it looks like Ritual may have actually done it first.

Although they would never attain the fame or influence of their contemporaries Southern Death Cult or Sex Gang Children, it speaks for itself that drummer Ray Mondo ended up in first Death Cult, and then Sex Gang (before unfortunately getting deported back to ) and Jamie Stewart first into Death Cult and later The Cult. The remaining members minus sax reformed themselves as In Excelsis.
Since I imagine chances of finding actual copies of these singles would be slim, it’s reassuring to know that odd tracks do crop up on various compilation albums around the place, most notably “Mind Disease” on In Goth Daze (Anagram, 1994) and “Questioning the Shadow” on Goth Rock 3 Black on Black: Best of 80s Collection (Jungle, 1998). In better news though, a full download of both singles can be found at the link below. 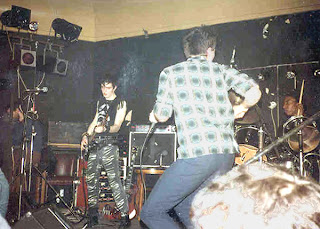